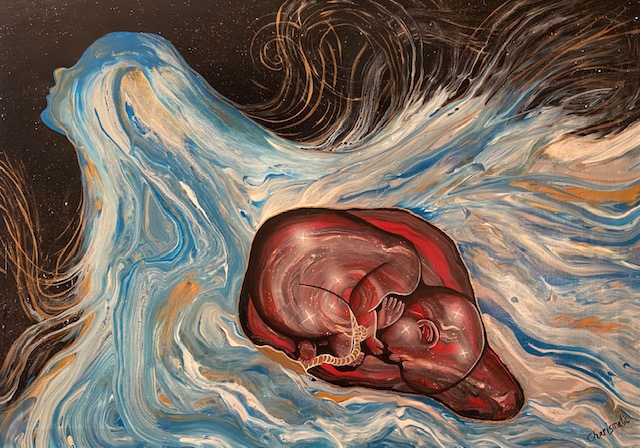 The Womb of God

Several months ago, while spending some time with the Lord, I suddenly saw an image of the Holy Spirit with a womb.  Inside the womb was the universe – everything ever created.

As I questioned the Lord about what I was seeing, I heard “Everything is birthed in and through the Holy Spirit”.

Still, I found it hard to picture the Holy Spirit with a womb.

Until the following day…  Randomly, I popped into a conference for a session at a friend’s invitation.  The first thing rolling off the teacher’s lips regarded “the womb of the Holy Spirit”.  I went bug-eyed for a few mins..

The painting above has invoked a lot of different responses.  Some hate it, some think it’s making some kind of political statement, others think it depicts “Mother Earth” giving birth, and still others find it moving, life-giving, profound.  Art is supposed to do that I suppose.  For me, I was compelled to paint to the best of my ability what I saw, except what I saw didn’t include the image of the baby.

When I began to paint, I kept seeing the image of an infant, an unborn fetus overlapping the universe.  I honestly fought it.  I tried multiple times to paint it the way I wanted to, but each time I met failure, until I went with what the Spirit was leading me toward.  Even the placement of the womb seemed too high for me, but then came the whisper, “I birth things from My heart.”

So, it’s been almost two months since I was compelled to paint it.  And last month, the God of the Universe seemed quiet about it all.  Crickets really.  Like He was just enjoying the wait, the watching.

Until yesterday morning…  I was preparing to go to a friend’s to pray over some land.  I heard distinctly, play “Isaiah’s Song”, so I did.

As I was listening, the words played over and over, “What was a barren season is giving birth right now.”  Then, immediately I heard to share that with a specific friend who has gone through a painful season.  “Ok?  That was pretty strong,” I thought.

A few minutes later, I found myself texting a friend – just a “how are you?” kind of text.  I looked down at the phone.  The time read 11:11, which to me are alignment numbers, and those very same words were playing again.

At the prayer event, we took turns reading scripture.  It’s our second time being apart.  The first time was towards the beginning of this year.  As my husband and I walk into the room where the readers were, they were finishing up Song of Songs and beginning to read Isaiah.

“Lord, if you have me read about the barren woman giving birth, I may burst.”

People come in to read, we add an extra, another person is randomly skipped, and my turn comes around.  I begin to read Isaiah 53, and as the words regarding Messiah leave my lips, I flashback to several months prior.  I had read the exact same passage when I was at the previous prayer event at this same place.

I flipped the thin page, “Shout for joy, oh barren one…” I choked up, but tried to hold it together. “For the sons of the desolate one will be more numerous than the sons of the married woman.”

So, what does all this mean?

I’ve learned not to try to figure out visions, prophetic words, especially timing and how things will all work out, because quite honestly I’ve got about a 5% accuracy rate.  😊

This is the season I believe we are in as the body of Christ.  The Lord of Host is birthing His plans and purposes in the Earth right now, and they will not be thwarted or delayed.  It’s not us doing it.  It is by His strength and ability that this new season and new birthing will occur.

“Shout for joy.” The birthing season is finally here.

← The Heresy of the Vineyard
Forgiveness or Judgement →