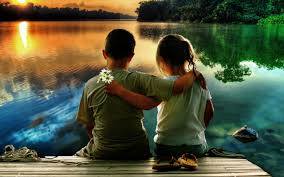 “Are you real?”  Where are you? I’m so scared and so very much alone!” A little girl of 7 or 8 was sitting on the end of an old bed hugging her legs and hiding her face in her knees. She was crying and talking to God: “In that fairytale you opened up the sea! And our neighbor, old Martha, said you are real and you hear what we say. I don’t like to be alone. Do you really hear me? Oh I wish so much you would be real! Please, be real!” she was sobbing and mumbling on.

“Lena has an imaginary friend. She was telling us about this friend who never leaves her and they play together all the time! My Mom thinks that is silly and it is better to play with real friends. But…. perhaps… could You, God, be my imaginary friend? How cool would that be? We could play together and you could stop the rain so we could stay outside longer! You could tell me if Uncle Oscar is sober and if it is safe to go home or not. You would know things like that, wouldn’t you? God knows all things, right? Oh! I wish you were real!”

“What if I am?” A calm voice filled with love and peace whispered the question inside the girl’s mind. She breathed in sharply and her breath caught in surprise and went still, listening and waiting.

IT WAS a dark and dirty room. The electricity was turned off a long time ago, so when evening came there were no bright lights to scare away dark shadows from scarce furniture, and long lights from passing cars were creating ghostly shapes on the old yellowish wallpaper.

“Hi. I would love to be your friend! “ A boy about the same age was mimicking the pose of the girl while sitting on the opposite side of the bed. But he was looking at the girl. There was something special about this boy. There was no fear in him. Endless peace and life radiated from him and all the room felt light. His curious eyes where fixed on the girl, waiting on her reply. She looked up from her knees and stared at the boy. She ought to be afraid to see a boy in the room, sitting on her bed, but there was no room left for anything but the miracle of this meeting.

“Cool!” mumbled the girl.  And then she added outlaid, “What’s your name?”

“That’s the strangest name I have ever heard!” Then smilingly she added  – “But I like it! Will you stay and play with me?”

“I would love to stay with you! And I love to play too.”

“What is your favorite game?”

“Depends. But I love to fight monsters! Come!” He said to the girl jumping off the bed and stretching his hand out to her. She hesitated.

Yeshua stopped, came back to the bed, sat closer to the girl and gently said,

“I know. It’s not fun to lose. But I’m here to show you how to win. When you’re with me I won’t let any monster touch you. And…it’s gonna be SO MUCH FUN!” He added longingly. The anticipation and joy was brimming over him and becoming almost tangible. He could hardly sit still.

The girl had to smile. You know, true joy is contagious. Yeshua stood up from the bed and stretched his hand out again in invitation.

“Ooooh! Ok!” She said and jumped out of the bed and put her hand in the hand of Yeshua.

A school yard. It was sunny day and the kids where on their lunch break. In a small cluster they were enjoying their lunches from home. Laughter and conversation filled the small courtyard of the school. The biggest group of kids was sitting under the tree, and some others were on the grass.

Yeshua pointed to the end of the courtyard where three boys were standing. Two of them were laughing at the third one. The third boy was sitting on the ground and hiding his face in his arms, while the other two were shouting sarcastic and angry words at him.

Then as the words were said, suddenly a huge and angry hen appeared in the air. It was twice the size of the kid yelling the words. The chicken ruffled its feathers, looked around and then when it found the subject of the words, started to go towards the sitting boy.

“Do you see it? Asked Yeshua anxiously.

“The chicken; the word-monster created by that boy!”

“What!? she looked at Yeshua perplexed. “There are NO word-monsters!”

“Where did it come from?”

“The boy created it!”

“Every time you say words you CREATE what you proclaim!”

She looked at Yeshua stunned. Then she looked at the ugly chicken that was approaching the boy.

“YOU UGLY CHICKEN!!!” Yelled the pair, and with every word the chicken-monster grew even bigger. The hen attacked and the boy shrugged every time its huge beak bit at his head, shoulders, arms and back.

“Do something!” cried the girl. “You said it was gonna be fun, and it’s NOT!!” She was anxiously shaking Yeshua’s arm.

“Just wait and see!” Yeshua told her and ran up to the besieged boy. He whispered something in his ear. The boy got still, and then he looked up.

“I forgive you,” he whispered. “I am an eagle.” He quietly but confidently pronounced.

At the same moment a mighty eagle appeared and ascended from the sky above. With one swift circle he plucked up the ugly, screaming chick and threw it in the air where it disappeared. Then it flew down and stood behind the boy, covering him with its wings.

Yeshua was hooping and dancing beside the boy. Then he looked at the girl and called out,

The girl watching the scene was stunned. “Yeah!! But what happened? What is it?”

“Simple!” Said Yeshua while sitting down beside the girl.

“Life and death are in the power of your words. Choose life! Proclaim life! CREATE Life!”

“But it’s not real!” Protested the girl.

“Oh, really? Does it hurt you when some one calls you names? How can it hurt you if it is not real?”

She was thinking. Remembering all the hurtful words said about her in school and at home. In her mind every word became a sword or an axe; and then she saw the monsters attacking her, cutting her open and leaving her bleeding. Tears again started to run down her cheeks. A quiet but concerned voice caught her attention,

“I would love to help you? Please, honey I can’t watch you suffer like this, please, please let me stop this!” She looked at him and tilted her head.

In the next moment, both of them were in an open space. The air was filled with the smell of honey and flowers. Feelings of comfort, security, love and coziness filled the atmosphere. Yeshua sat down in a big bean-bag chair and breathed out in relief.

“Come, we need to talk” she was still looking around in amazement.

“Where are we? What is this place?” she asked.

“One of the hiding places in my Fathers house.”

“Yeah.” Replied Yeshua smilingly. “I come here every time I need to think or hide or rest. And by the way, He said to tell you that you are always very welcome to come here too!”

The girl looked at him with wide eyes filled with surprise, hope and disbelief. But Yeshua was back to the subject He had started on before,

“Listen. I have some questions for you. You said you don’t believe that words can hurt, but they do! Do you know WHY or how?”

“I am not sure.” the girl remarked sadly.

“They hurt because they become REAL when you believe them. They are real monsters, created by those who speak them into existence. But you have the power to stop them.”

“Easy!” Smiled Yeshua. “First, you must recognize that they are lies, know that they are not true. Then, you think the opposite and CREATE that by pronouncing it aloud. You, as champion, will win over the monster! Simple. Do you see?” announced Yeshua, beaming with a smile.

“But there are so many of them!”

“I know,” remarked Yeshua gently. “But we will fight them one by one. And I will be with you! I will help.”

A sound from somewhere became audible;

“That worthless brat!” and a sound of braking dishes filled the old room.

The kids were sitting on the old bed. The girl froze. Yeshua looked at her and his eyes were full of joy and anticipation.

“THAT BRAT…!” and through the wall a gray misshapen monster started to appear with black empty eyes… .

“Look at me! Don’t look at him, look at me!” the girl looked at Yeshua with eyes full of tears and fear. Yeshua was brimming with love, joy and confidence. Little flames of laughter danced in his eyes. “Repeat after me. That is a big fat lie!”

“That is a big fat lie” whispered the girl in a trembling voice.

“You are an AWESOME TREASURE!”

…. Silence. Tears ran down her face.

“I believe it! I know it! Say that I told you that you are an AWESOME TREASURE! You can say it in MY name. Use MY faith. It’s OK!” the boy Yeshua offered eagerly.

“OK. I will try…Yeshua says that I am an awesome treasure.” Whispered the girl and the room stilled.

“Good! See, it works! Say it again, and louder, so that this thing hears it too!”

“I am an awesome treasure, that’s what Yeshua says.” Pronounced the girl out loud.

The monster stopped just five steps from the kids. It started to tremble, crunched up its face and started weeping out loud. Then the girl repeated her announcement and a shining brilliant stone, like a flower bud in appearance materialized from the sound that the words created. Yeshua touched the stone and it opened. Bright blue and white light shot out filling the room destroying any darkness and presence of the monster.  The girl started to laugh and every sound coming out of her mouth formed different shapes and colors creating marvelous creatures that wrapped both kids in Royal Presence…

“You ARE AN AWESOME TREASURE!” Yeshua proclaimed with wonder.

The old woman next door was talking to her old friend – God. “Thank you for my little friend!” she said. “She needed to meet you. Now I am in peace. I know you will take care of her. I was concerned, but if not for your advice I would never have thought that the story of Moses and crossing the sea would be the one that would catch her attention! Thank you Lord!”

And the angels were standing guard by the window of the praying old lady and the little girl who was enjoying her newfound friend, Jesus.

← The First Embrace
Step Into the Fullness of Your Identity →