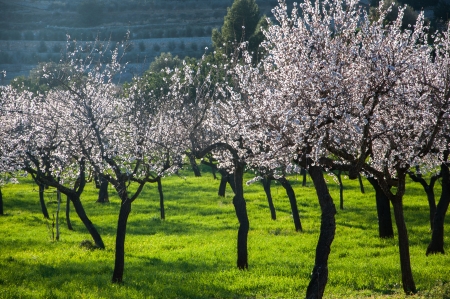 The Keeper of Promises

Yesterday was a day of cooking.  I’m preparing for a busy, pre-holiday weekend that has a ministry event right in the middle of several social events.  As I worked through the day, I was thinking of the many things we have to be thankful for this year.  The miracles that have occurred throughout our year and also the not-yet things that have been promised to us.  I was tired but full after a night of laughter, hosting some dear friends for a simple dinner last night.

This morning, when the phone alarm went off, seemingly way too early, but at the usual hour I picked it up to turn it off and it appeared to say 1:11 ALMOND across the front.  I blinked and looked again and saw the alarm properly set 5 a.m and not 1:11 and turned it off.  I mentioned it to my husband and he said, “I think what you saw is “ALARM.””

Still, I felt like Papa was getting my attention.  As the ALMOND word poked my groggy brain awake to the realization that the Lord had shown one of those prophet boys an almond branch.  It was either Ezekiel or Jeremiah.   I remember it because it is a neat picture of a prophet being trained by the Lord.

(Aside) Do yo see how easy it is to miss the Lord speaking to us? Papa God loves to coax us with the allure of hints, into the adventure of relationship with Him.  See Proverbs 25:2, “It is the glory of God to conceal a matter; but the glory of kings is to search out a matter.”

Now I had not had my coffee yet, so it took me a bit to figure out what He was saying to me.  Initially when he said 1:11, I assumed He was taking back to Genesis 1:11, because He has been talking to me about 1:11 and the seed bearing plants and trees that produce fruit after their own kind all year.

Before I went to Genesis, I Googled Almond in the Bible.  Several things came up: In Gen 43:11, Jacob sent the boys back to Egypt with gifts to present to the Egyptian Ruler (Joseph) as a witness of his gratitude and personal wealth.  Almonds are included in the bounty.

In Gen 30:37, Jacob puts 3 kinds of peeled tree branches in the water for the livestock to look at and reproduce.  One of them was an almond branch.

In Numbers 17:8, Aaron’s rod sprouted in the tent of testimony, and produced buds, blossoms and almond fruit.  All of these have to do with witness.

In Jeremiah 1:12 the Lord affirms what Jeremiah has seen.  “And the Lord said, “That’s right and it means that I am watching and I will certainly carry out my plans.”   In other words, Wait and see, my words will be fulfilled!

After I realized that, I went back to Genesis 1:11, even though through the year I have come to know it quite well.  I noticed I had written a note in my bible next to the verse.  It said Jan 2017- that is when He first began sending me to that verse this year.  Month 1.  Now, here we are in November.  Month 11.  I laughed, then I cried. He is telling me that He is watching over His word, His plans, His promises to us and He will certainly carry them out! What a year! Wow!

Now you might say that we prophetic people get all caught up in details like numbers and symbols and words, but they are the language God uses to catch our attention.  They are the shiny attention getters to help us listen for the still small voice.

If you want to know the truth, they are the language of the Bible.  Symbols are everywhere in the Bible and give amazing depth to the words.  Words are chosen precisely and each name carries depths of meaning.  Numbers in the Bible also carry richness, far beyond what my mind can currently handle.

Psalm 91:4, a verse I recite often, is so true, “His faithful promises are my armor and protection!” They are what I hold onto no matter what life looks like in the moment.  I love that He reminded me today that He is watching over His promises and will carry them out for us!  Maybe I will plant an almond tree this year as a visual reminder.

I am so blessed to know Him and to His humor, His love notes and His faithfulness.

I encourage you to pull out the promises He has given you, even if they were long ago, and thank Him for their fulfillment.  I pray it makes for your happiest of Thanksgivings, this year and in the year of their fulfillment too.